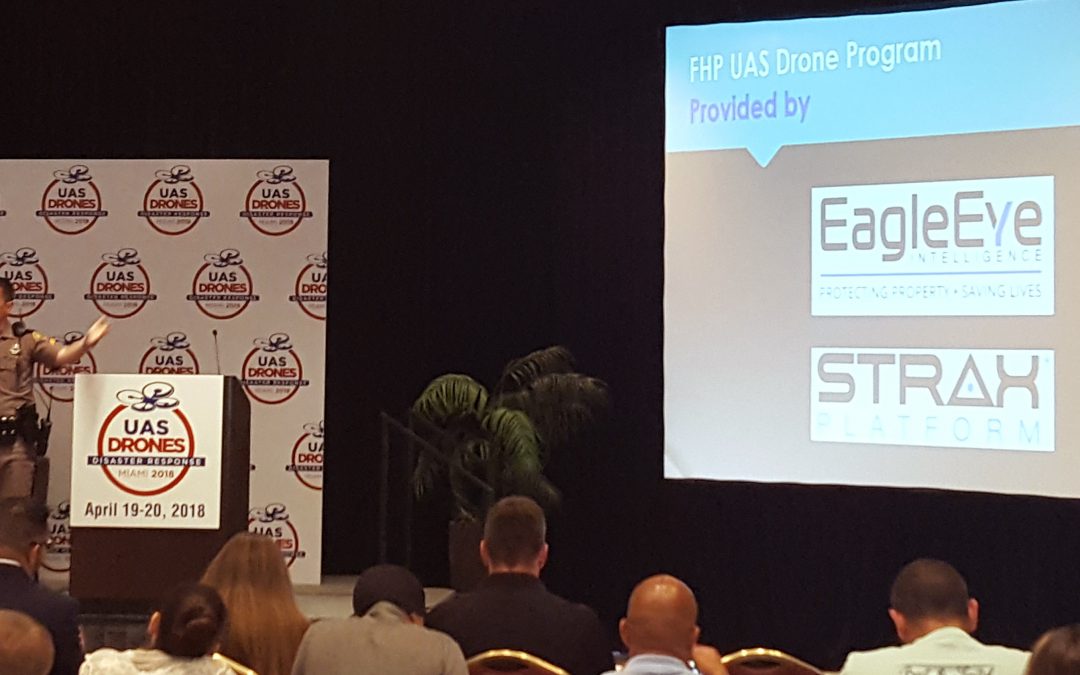 The conference, which focused on learning how to prepare, respond and recover from disasters utilizing the power of UAS/Drones, spanned two days and was brimming with expert insights, real-life use cases, and live, on-site UAV demonstrations. EagleEye Intelligence’s Director of Flight Operations, Dean Attridge along with Captain Kenneth Voiret from the Palm Beach Sheriff’s Office, and Captain Strickland and Sergeant Dooley from the Florida Highway Patrol were significant contributors to the topics presented.

Florida Highway Patrol, Pilot in Command, Sergeant Dooley, presented on the first day of the conference to an attentive audience during a workshop entitled, “Drone Use Cases for Public Safety and Emergencies.”  Sergeant Dooley shared details of FHP’s new UAS program and the benefits for use in traffic incident management, traffic homicide investigation, damage assessment and search and rescue. In addition, he reviewed a real-life use case as he detailed operating the UAS and utilizing the STRAX® Platform to investigate the deadly bridge collapse on the FIU campus that occurred just the month before. Following the presentation, he and Captain Strickland gave a live UAV flight demonstration and showed off the integration with the STRAX™ Platform.

The two gave an overview of their deployment to Monroe County in the days immediately following Hurricane Irma. Palm Beach Sheriff’s Drone Unit, along with pilots and support staff from EagleEye Intelligence, flew multiple missions over Big Pine Key including search and rescue, damage assessment and counter looting. Using the live data feeds from the UAV’s and EagleEye Intelligence’s STRAX® Platform, information was quickly relayed, in real-time, to both the pilots and Monroe County EOC where relief efforts were being coordinated by multiple agencies. The feeds were also viewed in real-time at EagleEye Intelligence’s Boca Raton headquarters where additional support was available to notate damage, assist pilots and help monitor feeds.

The UAS/Drones for Disaster Response Conference was created by AIRT, Inc. (Airborne Incident Response Team), a Florida-registered 501(c)3 non-profit organization, to showcase the growing role of unmanned aircraft systems (UAS) – also known as “drones” – and their related technologies to help before, during, and after major emergencies and disasters. EagleEye Intelligence was excited for the opportunity to bring first-hand experience and knowledge to attendees on how UAS can be effectively used to strengthen preparedness, response, and recovery phases of any disaster.