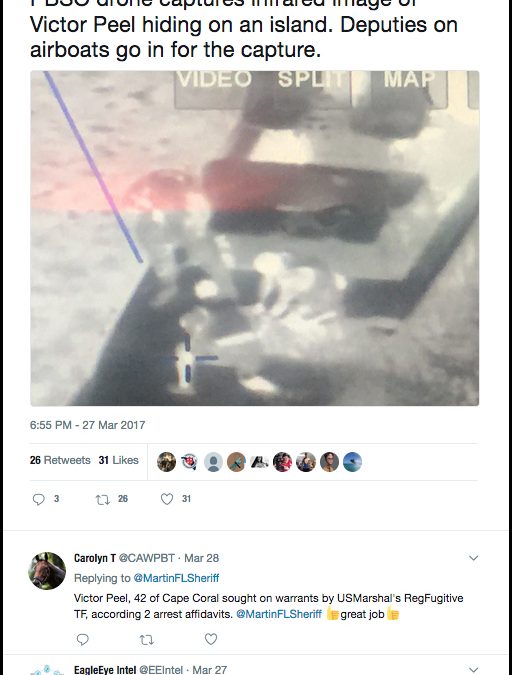 Airboats, a drone and infrared sensing equipment had to be brought in to track down a suspect sought on warrants by the U.S. Marshal’s Regional Fugitive Task Force. Through infrared cameras on a Palm Beach County Sheriff’s Office drone, deputies found the suspect hiding in the swamp after a 5-hour manhunt.

The suspect, led deputies on a pursuit from Martin County into Palm Beach County, according to the Martin County Sheriff’s Office. Wanted on warrants for burglary and grand theft in Martin County, he led law enforcement officers on a two-county, five-hour manhunt that ended in swampland in northern Palm Beach County. They say he tried to run deputies off the road but eventually crashed in a ditch and made a run for it into alligator-infested waters.

According to Martin County Sheriff’s Chief Deputy Glenn Theobald, there was initially concern over what had turned into a night search, however he later stated, “The sun going down, that actually works to our advantage because with the infrared, everything gets cooler; infrared picks up the heat and the drones that were used by Palm Beach County identified a heat source and were able to direct the deputies to go and surround the heat source and move in. He was in a wooded area, in the actual water itself.” It was only about 15 minutes after he was spotted by the drown camera, to when he was in custody.